By all means, work it until it becomes second nature, fast, impressive, and powerful. But, while you’re doing that, be sure to pay real attention, because the goal is not just to show off how good you are at that specific drill – that’s just martial arts patty cake. No, you have to dig into them, and to do that, you have to use that gray matter between your ears. Drills are at least as mental as they are physical, perhaps even more. 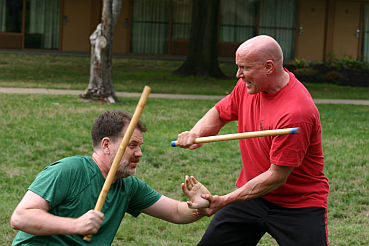 Drills need to be explored, but if you don’t practice them with intent, you’re just going through the motions, and you won’t get very far. For example, if the drill requires you to strike the temple, you should really aim for it with proper angling, distance, and timing, until the opponent either responds correctly or they don’t. If the latter, then you can adjust to avoid damaging them, and you continue so they can improve. Meanwhile, you’ve been true to your own training, developing proper attributes at the same time as good observation and reaction skills.

Eventually, you’ll want to push the drill more, properly exploring its limits. This is called making the drill “live.” Start by using broken or unpredictable rhythm so that the response is not anticipated in advance of the trigger, but rather it becomes correctly triggered. Eventually, you should stop “holding back” and really go for that temple strike we talked about earlier. If they fail to respond correctly, so be it – lesson learned.

Proper drill work can teach you a lot about positioning, timing, distance, targets, structure, sensitivity, power generation, speed, footwork/movement, counters, and so much more – and that’s without even “breaking” it. By paying attention to the flow of movements, you can get a feel for the reactions that are being trained, including what should be where, at what time, and why. You can learn how your positioning and footwork influence your available targets, your power generation, and your defenses. Did that movement just make it harder for them to hit a good target, or cause them to release their hold, maybe at the same time exposing targets for you and helping them to be off-balance? Perhaps if you do that parry just so, they are taken off-balance giving you extra advantage. Find out what makes the drill tick, what are its strengths, but also what are its weaknesses – no drill is perfect. Develop your understanding under the laboratory conditions of training because you if you have to think when you need your skills, it’s way too late.

Once you get the drill, you should start to “break” it, but not before the participants have it down pat. Breaking is where the real exploration begins, and it can teach you opportunity, manipulation, broken rhythm, adaptation, reflex, and flow.

Examples of simple changes include choosing a slightly different target, changing a step to a kick or sweep, substituting an alternate means of accomplishing a particular move’s effect, or even inserting a new move into the standard mix (perhaps taking advantage of some weakness of the drill). It is also usually extremely useful to explore the drill opposite-handed, both simultaneously and one partner at a time.

More advanced changes would be to insert half-beat moves, such as an attack in between each movement, or on-beat simultaneous attacks by an otherwise unused limb. Contact triggers are another good approach wherein anytime your opponent makes contact you execute a trap, lock, or unbalancing movement – inserted without warning in the midst of the flow of the drill. Do an empty-handed drill with a weapon in hand, and vice-versa. If you know other drills, you can cross over to and from those other drills, at first maybe one side at a time and then eventually getting more and more random and unexpected action, which should be one of your ultimate goals.

Throughout your work exploring and breaking the drill, you should continue to practice with intent and keep paying attention to understand the implications of the changes – how do the movements work, what opportunities are there, how is the footwork affected, etc.

With a bit of creativity and your own martial arts background, there’s really no limit to what you can get out of a drill. So, explore away, get the most out of your drills, and grow as a martial artist.

If you’re not doing these kinds of things with your drills, using intent, and exploring, dissecting, and even breaking them, then you’re just going through the motions, and you’re not going to get much out of your work with drills. I certainly don’t want that, and I hope you don’t either.