Air or tracheal chokes – pressure is applied to the trachea (windpipe). Due to the structure of the windpipe, pressure to the front of the neck can cause it to collapse, creating irreversible damage to the structure itself, and causing blood flow into the lungs. If one thinks of the cartilage of the trachea as a Styrofoam cup, then poke a pencil or a finger through the material and see how it leaks and is not repairable. Air chokes are not instantly apparent. How long can one hold their breath? Since there is oxygen still in the blood, the action of an air choke still takes a minute or so for the person to pass out or suffocate. This type of action is considered Deadly Force. 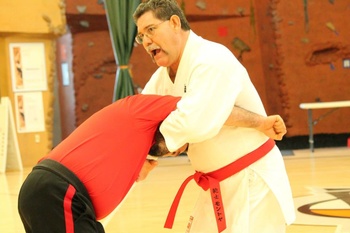 Blood or carotid / jugular / neck restraints – pressure is applied to the side of the neck. Due to the structure of the neck, pressure to the sides of the neck can cause a reduction of blood flow to the brain and a localized pressure increase. The cause of unconsciousness is from either decreased or stopped blood flow to the brain and immediate oxygen deprivation, increased localized blood pressure, or a stimulation of the Vagus nerve (sometimes called a Carotid massage in medical literature) which depresses the heart rate and blood pressure and subsequent loss of consciousness. Generally, but not always, the immediate release of neck pressure restores blood flow and normalized pressure, and the person wakes back up. This action happens quickly, within a few seconds.

Consensual fighting is illegal, but one always retains the right to Self Defense. From a legal standpoint, a choke is a deadly force encounter and a neck restraint is below that. Please use the term Neck Restraint, just as a joint lock is a limb restraint as compared to an “arm destruction” (words matter and their context). From the standpoint of Self Defense, once the Attacker has stopped attacking, the Defender has to stop their actions too. If the Defender continues to inflict punishment on the Attacker after the Attacker has had the Weapon removed or disabled, has removed the Intent, has prevented the Delivery System or Motor Action, then the Defender is now the “Bad Guy”.

If a Defender applies a Vascular Neck Restraint, the Defender must stop their action as soon as the Attacker has succumbed. Since the action is to prevent blood flow to the brain, damage occurs quickly if blood flow is not restored. Thus, one cannot “keep cranking” on the Attacker until help arrives. One can sit on top of the person in a position of control until help arrives, or leave. As necessary, call 911 to report the assault as soon as you are safe.