Continued from Stances Part I 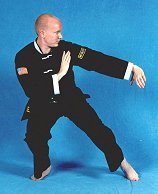 Moving from stance to stance uses some of the biggest and strongest muscle complexes in your body – legs, hips, core, and lower back. It also usually involves either linear motion or rotation of your body’s center of mass. Both of these aspects come together with our ability to use the ground when understanding martial arts power generation. Think of your dantian (丹田) as your center of mass (tanden or hara for the Japanese stylists). Your ability to move your center comes most effectively from the muscle complexes around it and between it and what you’re bracing against – the Earth. You push your leg against the ground, and your body moves. You twist your waist/hips against the ground through your legs and your body turns. You expand your back and contract your center, and your body sinks. If you try to use muscle complexes above your center, you don’t move as efficiently, you’re likely to lose much of the power you’re trying to generate and apply, you can end up overextended, and/or you’re just using local arm power and not taking advantage of your structure and larger muscles.

Find the transition power generation in your own movements

If you are doing a traditional martial art and you do forms (chuan, kata, poomse, hyung, djuru, etc), an easy way to suss out how your movements give power to your applications (i.e. power generation) is by doing your forms without the arm motions. The intricacies and timing of your arm motions can distract you from feeling what is going on with your power generation. By stepping through your forms without those arm movements, you are forced to look at what you are doing with each transition, the how and the why. You effectively put a microscope on what is happening as you transition through the movements. Stepping, twisting, turning, rising, sinking – all of these have profound consequences for the arm movements you would otherwise be doing at the same time. Do this enough to get a good feel for what is going on with your stepping and shifting from posture to posture. Then, when you go back and do the form properly, you will have new insight into how those things should factor into your arm motions and especially their applications.

Here’s a simple exercise to show this type of power generation for twisting: stand in a comfortable right front forward stance with your right leg in front, slightly bent, and your left leg to the rear, mostly straight. Relax your hips and center, relax your upper body, and rock your hips under a bit (no clenching). Now, keeping your arms at your side, raise your hands and forearms only, making sure that your elbows (which should still be by your hips) and upper body are matched to your hips and will only move with their movement. From here, you can now experiment with Old Ox power by simply pivoting on your feet (I prefer heels or center), straightening your right leg, slightly bending your left leg, and turning your hips to change directions. Your torso and arms should have “ridden” on top of your hips and now face the new direction naturally as well. If you try this with a partner, you can put your hands on their upper arms or elbows and move them simply as part of your turn, with very little effort even if they’re in a stance as well. This is one example of shifting from stance to stance to generate power. 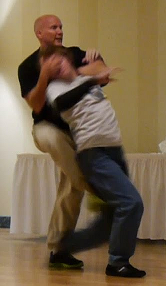 Similarly, when you grab someone and step and/or twist to accomplish a throw, you’re also using the stepping and shifting I’m talking about. You should not be depending upon your relatively weak arms to work the throw. You should have braced against the ground to position yourself relative to the opponent’s structure and leveraged against that with a step and a twist, and voilà, they will go tumbling against the biggest thing you can hit them with!

There are innumerable ways like this to use stepping or shifting to generate power for a throw, a lock, a strike, a sweep, a release, an escape, or whatever. And no doubt you already do some of these.

You should examine in detail all the movements in your style and ask yourself how is this being powered? For striking, you should also look at how a twist can add penetration, or a low stance can add gravity’s help, or how a step can power the hip that powers the strike, etc. For locking, you should look at how a shift can direct their center to the lock as opposed to using their arms, or how a hip twist can direct the lock through the opponent’s center, or how a step can drive the lock deeper instead of using arms, etc. For defense versus standup grappling, you should look at how that twist can dissolve a lock, or that step leverages a grab release, or sinking nullifies a throw, etc. And so on, for throwing, for kicking, for avoidance or quick unexpected motion, and more.

Once you know how your moves and applications are being powered, you can use that knowledge to work backwards – i.e. this motion teaches me to generate power thusly, so given my positioning how can I apply that power in combat or self defense? You should be pleasantly surprised with some of the new applications you find, and working to understand these things in depth should make your power generation more effortless, more natural, and more effective.

These are just some of the basics behind deconstructing the power generation behind your transitions from stance to stance. There are countless ways that shifting from stance to stance can inherently develop or add power to a technique. There are also more advanced options for using the up-down and in-out axes that we will explore more specifically in a later article.

So, for clarity’s sake and to foster more complete martial development, please think and teach “step,” shift,” or “transition” instead of “stance.” Or at least explain in detail and with examples what stances are for, even beyond what I’ve discussed here. I’ve only briefly touched upon the cornucopia of uses for moving between stances; as always, you must explore on your own to get the most out of your training.