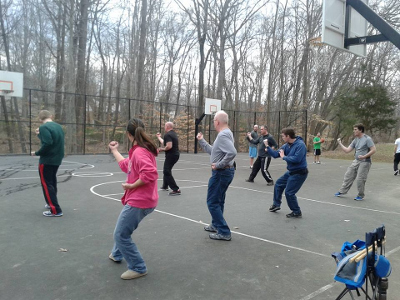 I had the pleasure of doing a guest blog article on forms and what they may or may not be good for originally hosted at my friend Jackie Bradbury’s blog, at the StickChick.com, but that old site is defunct now, so here is the article:

Some people laugh at forms (sayaw, chuan, kata, hyung, anyos, djurus, poomse, etc), call them a useless dance, and say they’re no good for combat or self-defense training at all.

And they could be right!

Then again, maybe there is more to consider…

If forms are practiced only because they must be learned (i.e. going through the motions) just for show at tournaments, because they look cool, or in any other manner that doesn’t place things like intent, applications, power generation, visualization, timing, distance, and combat movement as top priorities, then yes, the form detractors are more right than they are wrong.

Forms practice without those things can be a waste of time at best, and at worst it can provide a false sense of ability or train in movements that the student cannot apply. You don’t just get magical fighting prowess by learning to perform a form – it just doesn’t happen. The bottom line is that doing the motions in the form by rote, even as a catalog of moves, is just the tip of the iceberg of what forms have to offer a studious practitioner.

Like much of martial arts training, forms are about attribute development. If you let them, they can be a handy solo way of practicing through a variety of movement transitions and timing combinations. The series of moves runs you through a series of shadow-boxing style moves that can exercise your balance, stability, movement, focus, power generation, relaxation, visualization, and more. A lot of this will depend upon how you practice using various attitudes while moving (relaxation, grounding/balance, exactness, character/flavor, visualization, intent/focus, and awareness/perception). Like most aspects of practice, you get out of it what you put into it.
Forms practice also benefits greatly from studying applications for bite-sized chunks of movements from the forms (striking, parrying, positioning, unbalancing, seizing, releasing, etc), with interlaced half-techniques sometimes being the most surprising. The individual moves and combinations must be deconstructed, tested, and seriously examined – there is no magic there. If done correctly, forms can help you realize new ways to use the movements, including basics like power generation, maneuvering, and unbalancing, or even new tactics altogether.

Lastly, I would point out that martial arts without recognized forms/kata/hyung/etc actually do work on material in ways that is very similar to forms work. They will work set combinations and explore them like I recommend you do your forms. They will work transition flows as essentially 2-man forms, whether they be standup lock flows, ground-work pins and escapes and reversals, or Filipino weapons drills. They relax into their combinations or drills, learning to feel the flow and power, learning to limit/reduce weaknesses, and making the moves their own – just as should be done with forms work for those styles that train them.

Personally, I don’t care if a style or teacher does or does not use “forms” per se. Do they have a method to train and pass on their material in a way that allows a student to develop into them and the moves to develop into the student? Can the material be practiced in a variety of ways to allow the student to gain their own insights? Does the material have repeatable and demonstrable principles and concepts? And on and on…

The study and practice of martial arts involves the deconstruction and exploration of many things that can be part of the skills necessary for survival of physical conflicts, and forms work can be one of those many things if you are willing and able.

And keep on training, with intent.